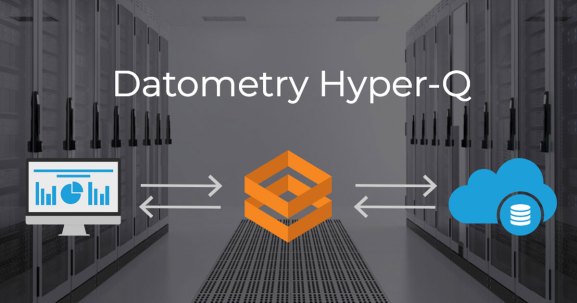 Warehouse virtualization, alternatively known as logical data warehousing and data federation, offers advantages over traditional data warehousing solutions in that it’s faster and cheaper to market. That’s because it doesn’t require designing, building, and deploying a data warehouse (i.e., a system for reporting and data analysis) from scratch and because it eliminates the need for pricey software licenses and hardware infrastructure.

Mike Waas knows this well. A former Microsoft and Amazon employee, he’s the founder and CEO of Datometry, a virtualization startup that’s developing a platform called Hyper-Q to make databases interchangeable by translating apps in real time. After raising a $10 million series A in June 2017, the company today announced that it has secured $17 million in a series B round led by WRVI Capital, with participation from previous investors that include Amarjit Gill, Dell Technologies Capital, Redline Capital, and Acorn Pacific.

Waas, who noted that this latest round brings Datometry’s total raised to nearly $30 million, said the new investment will accelerate go-to-market activities with partners like Microsoft Azure, Amazon Web Services, Google Cloud, and others. “Replacing a legacy data warehouse with a modern cloud data warehouse is one of the most rewarding, but also the toughest, challenges IT leaders are currently facing,” he added.

To this end, Datometry’s Hyper-Q allows existing apps to run natively on cloud data warehouses without the need to change SQL, the domain-specific language used to program and manage data in a relational database. Using a technique Waas calls “adaptive data virtualization,” Hyper-Q emulates legacy warehouse functions and transforms the apps themselves, all while connecting seamlessly to warehouses like Azure SQL DW, Azure SQL DB, AWS Redshift, PostgreSQL, Google BigQuery, and Snowflake and deploying on-premises and to AWS, Azure, and hybrid clouds.

Concretely, Hyper-Q intercepts communication off the network native protocol and returns results for database applications, translating query statements and results in real time. The platform also transforms keywords in legacy and source SQL statements that aren’t supported on newer cloud data warehouses and uses currently available SQL features and keywords to achieve the same results. Together, these techniques enable apps to use the SQL syntax and cut overhead to less than 2%, while in some cases increasing efficiency by batching together database operations.

As for qShift, which is a part of Datometry’s wider replatforming solution, it automatically converts legacy or source data warehouse schema into the cloud or warehouse of a customer’s choice. QShift takes into account the existing objects in the source schema and generates the appropriate queries for the destination warehouse, keeping track of database mismatches to use during query translation and transformation. And it helpfully preserves the original stored procedures and macros for emulation, such that the process remains autonomous.

Datometry offers a complementary product in qInsight, which summarizes the functional, operational, and performance statistics of data warehouse workloads while assessing their capability with a target cloud warehouse. It prioritizes workload hygiene and delivers a feasibility analysis that includes a timeline for implementation, analyzing millions of statements per hour.

Waas declined to name names, but he said Datometry counts many retail, health care, telecommunications, and electronics manufacturing enterprises in the Fortune 500 and Global 2000 among its customers. He believes this positions the company well in the soon-to-be $4.12 billion data virtualization market. “Our Hyper-Q platform redefines this transformation entirely: We give enterprises a software-based, simple, and reliable path,” he said. “We provide both cloud vendors and enterprises unique means to improve their competitive posture significantly.”

Sign up for Funding Weekly to start your week with VB’s top funding stories.

The AI event for business leaders JFrog IPO: Perfect tale of a team with...